By AtNigeria April 23, 2020
Grammy-winning crooner Bruno Mars is famous for his romantic hits Versace On The Floor and That’s What I Like. These songs have some serious passion! So much so that we can only assume that these songs were inspired by his longtime girlfriend, Jessica Cabana. 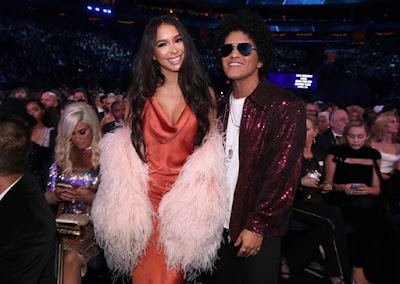 But who is she? And how long have Bruno Mars and Jessica Caban been together? In this article, we’re gonna fill you in on all the juicy deets about Bruno Mars’ girlfriend!

Who is Bruno Mars' Dating?


Before he met Jessica Caban, he dated backup dancer Chanel Malvar from 2009 to 2011. Their romance fizzled out when it was revealed that he allegedly dated someone else at the same time.

Rita Ora, who worked with Bruno around that time, confirmed that she had been dating him around that period. Yikes!

Looks like Bruno learned from that mistake! Despite being surrounded by beautiful women during his 2012 and 2016 Victoria’s Secret Fashion Show performances, Jessica is the only model he has eyes for. He hasn’t been linked to anyone else since he met her!

The wife of Bruno Mars is Jessica Caban.


You’d expect that for such a romantic guy like Bruno, his real-life love story should also be equally astonishing and give you all the “awwww.” Well, brace yourselves for a truckload of cuteness because for all the good there is, it does.

Bruno and Jessica, as mentioned earlier, met back in the late 2010s. However, they did meet in a party or any social events like most celebrity couples do.

They actually met in an entirely different setting. While Bruno was having lunch in a Co-op New York Hotel restaurant in Rivington, he could not help but notice the woman sitting on the other table chatting with her friend.

Bruno told himself how beautiful and vivacious Jessica looked and was mesmerized by her instantly. Talk about love at first sight.

While Bruno Mars is not the type of person who would lose some opportunity because of shyness and fear of creating an awkward situation, he confidently walked up to her and had a chat.

After a couple of dates, they became the cutest couple around, and a year later, Jessica was in LA living with Bruno.


Jessica Marie Caban is an American model and actress. She was born on June 13, 1982, in New York. Jessica is of Puerto Rican ethnicity, and she grew up in Spanish Harlem with one older sibling.

Jessica Caban is a Model and an Actress


Jessica got her first big break in 2002, when she was chosen to be the face of Jennifer Lopez’s clothing line J-LO. Soon after that, she landed several commercials and magazine shoots.

She later auditioned in 2008 for the first season of the modelling reality show Model Latina. Jessica was the winner of that season, and she was awarded a modelling contract with Q Management.

The Latina stunner made her film debut in the 2010 film Are You For Great Sex? As the lead Thea Larson, Jessica won two awards for her acting from the Boston and Hoboken International Film Festivals.

Recently, Jessica made a guest appearance on hit CW show Jane The Virgin, a show about a Latina virgin who becomes pregnant after being artificially inseminated by mistake.

She played the character of Sonia for four episodes during the show’s third season. Fans loved Jessica’s acting, and they were delighted when she announced on Twitter that she would make another appearance in Season 4!

Though Jane The Virgin has wrapped up, we sense more acting opportunities coming Jessica’s way!

Is Jessica Caban And Bruno still Together?


As of May 2020, Jessica Caban and Bruno Mars aew still together.

The couple did not split or have a break up in the past. They started dating since 2011, at least officially and have been dating so far. However there was a time when Bruno felt like he was losing Jessica.

He did not bother with the details but told that he felt their relationship struggling at a point. He basically wrote down his fear of losing Jessica at that time.

As of now, the couple have not reportedly involved in any major fights or arguments that may have hurt their relationship in any major way. His fans and followers always want to see him with Jessica and so do we.