By AtNigeria April 07, 2020
This article is all about the differences between a bat bug vs bed bug. Bed bugs and bat bugs are strikingly similar in the way they look, feed, and reproduce, but they are in fact different. Bat bugs are quite common in homes and look very similar to a bed bug. But they have quite different habits.


Bed Bugs have been a pest problem since the World War II era, and have recently made a resurgence in numbers, but have you heard of bat bugs? These fellow blood suckers are relatives of the bed bug; however, they prefer to snack on the blood of bats. Meaning, if you are finding bat bugs in your house, it’s probably because you have a bigger pest problem – bats.

Have you seen a bug crawling around your bed that resembles a bed bug? Maybe you woke up to find a red mark on your skin that looks like a bed bug bite? Well, it could be that you do have bed bugs, but it’s possible you’ve mistaken it for another pest; like bat bugs. 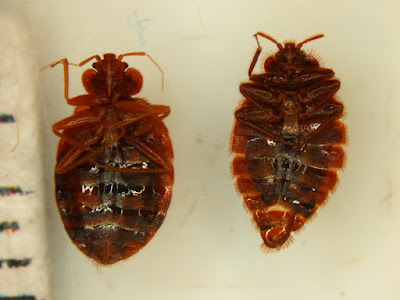 It is not easy to differentiate between a bed bug and a bat bug because of their possible family relationship. Their body shapes and color are almost identical. According to studies, the theory is that when originally early mankind were living in caves there were no bed bugs, but rather bat bugs. Inside of the caves bat bugs fed on the blood of bats and early people.

When the people moved out of the caves they carried along bat bugs on their bodies, and they later developed into bed bugs. Most likely because they had to feed exclusively on human blood then.

Bed bugs and bat bugs crawl, feed, and reproduce almost in the same ways, but still they are different.

What Is A Bat Bug & What Do They Look Like?


Bat Bugs have small oval bodies that are flattish, so they can easily hide in cracks and crevices. These insects are transparent tan or beige in color, but will quickly turn dark brown after a blood meal. Their mouthparts look like a beak, and are made for sucking and piercing.

These insects usually choose Big and Little Brown Bats for their hosts. The Bat Bugs will cling to the bat’s fur and travel back to the roost. Between meals, Bat Bugs will hide in cracks near where the bats sleep, like how Bed Bugs hide along mattress seams near their human hosts.


Despite their development to their respective species, bat bugs and bed bugs appear similar that their body feature differences can only be established using a microscope.

That’s why only a trained pest control expert will be able to accurately tell if the bugs that you are seeing in your home are actually bed bugs or bat bugs.  When viewed under a microscope, a bat bug is seen having longer hair in its thorax as compared to a bed bug.

Where Can You Find Bat Bugs


Location is another thing that distinguishes bed bugs from bat bugs. Bed bugs are mostly found in areas near their hosts (human beings), and some of such places include beneath mattresses, along with the edges of headboards, in a closet near your bed and any other furniture in proximity with your resting area.

On the other hand, since bat bugs primarily feed on bats, they’re mostly found in the harboring grounds of the hosts. Such places include the attics, ceilings and on walls.

Nevertheless, in case there are no bats, bat bugs will attack people as alternative sources of blood. For that reason, they may also come near or to your bed although that happens in rare cases.


Almost identical to a bed bug in appearance, a microscope is required to tell the difference between the two. The main distinguishing feature is that bat bugs have much longer hairs on their bodies than bed bugs. It is best to have a local pest management professional examine a specimen. Identifying the right pest is the first step to properly handling an infestation.

Aside from their appearance under a microscope, where you are finding the pests are usually a good indicator of which blood sucker has invaded your home. As expected, bed bugs are typically found in mattresses, or in nearby furniture within a bedroom. Bat bugs on the other hand, are usually found in bat roosting areas like basements, attics, or within the walls, but will sometimes wander into living spaces if abandoned by the bats.


The elimination of bed bugs involves altering their reproductive cycle through extensive pest management.  For instance, the disruption of the life cycle can be done using carbon dioxide’s cooling properties, killing all the present live bed bugs and their eggs.

When it comes to bat bugs, their elimination is not as demanding as bed bug control. Once their presence is confirmed, the best treatment for a bat bug infestation is the elimination of all the bats in the building.

Once that is done, all the exterior entry points should then be sealed to prevent a come-back of bats and the bugs. Having done that, you’ll rest assured that your home is safe from bat bug infestations.

The understanding of differences between bat bugs and bedbugs is essential for the determination of the correct method to use for their elimination.