By AtNigeria April 22, 2020
This article exclusively discusses Antonio Brown's wife. Antonio Brown is a professional American football wide receiver. He has held his passion and love for the game ever since he was a kid. 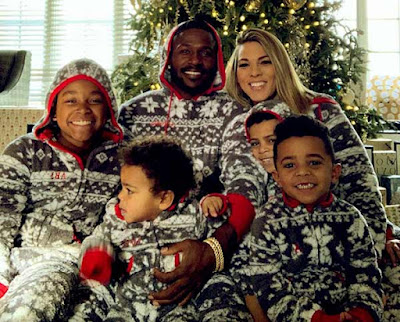 Throughout his career in NFL, he has played for Pittsburgh Steelers, Oakland Raiders and New England Patriots. He is currently a free agent.

Antonio Brown has been the story of NFL in 2019. He has been the centre of football news since joining Oakland Raiders after eight years at Pittsburgh Steelers. He has had problems since then. It all started with Brown missing training session at his new club.


For such a public-facing person as Antonio Brown, the identity of his girlfriend has been flying under the radar. According to The Sports Daily, Brown and Kyriss have been dating on and off for several years, and they have three children together.

The pair did go through a rough patch when Brown briefly let her for Instagram model Jena Frumes, but they are back together and the relationship is very strong.

As it turns out, Chelsie Kyriss is someone that has received a lot of hatred in the comments on Instagram. When the news broke about Antonio Brown and his deteriorating relationship with the Oakland Raiders back in late August, fans headed to her profile and began filling the comment section with bizarre – and often cruel – messages.

There was even one fan that theorized that Antonio Brown beats Kyriss. Most individuals would remove the ability to comment on posts due to vitriol such as that, but Kyriss hasn't done so.

Chelsie Kyriss have been reported to be with Antonio Brown throughout his controversial career. She is known to have been friends with the wives of Brown’s co-players. They might have broke up in the middle, but the couple seems to be living a happy life, in spite of the recent sexual allegations on Brown.

Kyriss is a mother of three children, born to the couple- the pictures of whom are visible quite a number of times on the social media profiles of both Brown and Kyriss.

Their first child, Autonomy was born in 2014. A year later, she gave birth to Ali and the couple welcomed their youngest son, Apollo, on August 1, 2017.

There was period in 2018, when the couple had a major period away from each other when Kyriss was supposed to be pregnant with their third child. During that period, Brown took to Instagram to post on his girlfriend with whom he had broke up.

The post, which was deleted once the couple reconciled read: “With all due respects any friends who consider @chelsie a friend should honestly help her vastly! She has two older kids Kellen Green 9; Brooklyn Green 7; she hasn’t seen or claimed in 4 years running around chasing me!” Brown wrote. “Her Mom Lynn Kyriss and Todd Kyriss cannot get ahold of her In regards of holding her accountable to her kids her family! Let’s not the internet confuse people upon her responsibility to her kids! I ask that if you are her friend encourage her to take care all her kids not just mine and be a woman we know she capable of! So we clear she’s my baby mama!”


The celebrity couple have five children. Their names are Atanyiah, Ali, Antonio Jr., Autonomy and Apollo. Apollo Brown is his youngest child born on August 1, 2017. Incredible photos of the kids are regularly shared online by the football star.