By AtNigeria January 19, 2020
Corde Broadus is the son of famous rapper Snoop Dogg – actually his first child. He is an actor and a model from Los Angeles, California. He is mostly known for being the son of rap legend, Snoop Dogg. 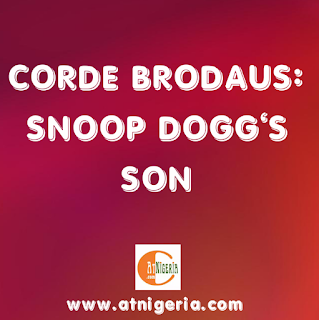 On 21st August, 1994, Snoop Dogg and his wife Shante Taylor Broadus welcomed Corde into the family. As of January 2020, Broadus is 25 years old.

Shante Taylor Broadus is Corde’s mother. She is Snoop’s longtime girlfriend. They got married in 1997, later divorcing in 2004, before remarrying in 2008.

Corde once dated Jessica Kyzer, an American model and social media influencer from South California. The two had a son together (Zion Kalvin) on January 14, 2015.

Years later, they broke up due to personal reasons that were not made public.

Following Corde’s breakup with Jessica Kyzer, he started dating Soraya. Corde Broadus and Soraya had a baby boy, who unfortunately, passed away 10 days after his brith.

In August 2018, the couple welcomed their daughter, Elleven Love.