By AtNigeria December 18, 2019
An article about the love story of one our favorite country singer, Dolly Parton with her husband Carl Dean which is well over 53 years now.

It is well over five decades now that Dolly Parton and her husband met, however, fans of the Country star hardly see the husband, Carl. He is known to keep things private and stays out of spotlights. Nevertheless, Parton said he is her biggest fan. 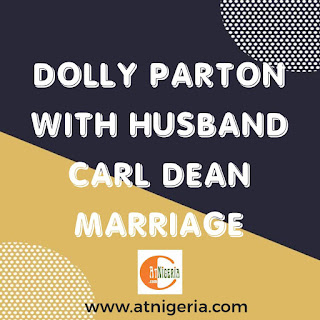 Parton said of Carl to People Magazine, “He’s always supporting me as long as I don’t try to drag him in on it… He’s always been my biggest fan behind the scenes, but he’s at home. I don’t think they’re probably showing much of this on TV, and if they do, he might see it.”


Let’s bring you the timeline of Dolly Parton and Carl Dean’s love life in over 53 years of marriage.


A timeline of Dolly Parton and her husband Carl Dean marriage

Dolly Parton met her husband in 1964 when Carl was 21 and Parton was 18. That was Dolly’s first day in Nashville.

Dolly Parton moved to Nashville to pursue her musical career in 1964 and signed with Monuments Record in 1965.

The couple got married on May 30th, 1966 when Dolly Parton was 20 and Carl Dean was 23. Aside from the couple, only three people were in attendance – Dolly Parton’s mom, Avie Lee, the Preacher that tied the know and his wife.

She together with Porter Wagner charted top 10 with “The Last Thing on my Mind.”

She released two records and was inducted into the Grand Ole Opry.

Parton wrote a hit single “Jolene” that talks about how a young red haired woman ‘Jolene’ was sleeping with her husband. There were speculations that it was true in reality. She however quenched the rumor by attributing the song to a young fan she met at one of her shows.

Dolly Parton wrote a beautiful love song which she dedicated to her husband. ‘From Here to the Moon and Back’ was released as a duet with Willie Nelson.

The couple renewed their marital vows in 2016 which marks the 50th anniversary of their marriage. The ceremony was held in their Nashville home. She said she couldn’t get her dream marriage in 1966.

In 2019, she told ‘Good Morning Britain’ host Kate Garraway that her husband Carl Dean is “not necessarily one of the biggest fans of her music… He likes hard rock, he likes Led Zeppelin and bluegrass music, so my music is somewhere in between… he doesn’t dislike it, but he doesn’t go out of his way to play my records, let’s put it that way.”

She admitted he supports her career in his own way “He’s proud of me”, she said. She continues, “For years and years he would never come to the show because he felt like he’d get nervous if I messed up, so he never wanted to watch it.”


READ: WHO IS CHRIS EVANS’ WIFE?

The couple doesn’t have children. However, they are very supportive of their nieces as well as Miley Cyrus, Dolly Parton’s goddaughter.

We wish Dolly Parton and her husband, Carl Dean more years of marriage and marital happiness.


READ: GABRIEL IGLESIAS’ WIFE – WHO IS SHE?