Most powerful politicians in Nigeria for this year

By AtNigeria October 21, 2019
Politics is a game of power, for you to get to the top though; you need the influence and endorsements of the powerful ones (who are known as godfathers). The search for most powerful politicians in Nigeria on search engines show people are really interested in knowing who the real deal are in Nigeria political arena. 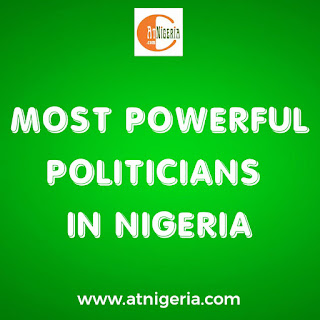 It is in lieu of the above that I have taken my time to study the Nigeria ‘POLITICOSPHERE’ in order to bring together ideas to form a rich article on the most powerful politicians in Nigeria.

The following list does not come in a particular order, as every name that appears in the list are adjudged to be very powerful in the country’s political climate.


Most powerful politicians in Nigeria for this year

Bola Tinubu is a former governor of Lagos State and currently the national leader of APC is one of the most powerful and most influential politicians in Nigeria.

Jagaban, as he is fondly called by his numerous followers has a weighty influence on the politics of Lagos State, having roiled for 8 years between 1999 and 2007, while also successfully ‘installing’ every governor in the state ever since then.

It doesn’t stop there, Tinubu’s influence on South-Western Nigeria politics cannot be undervalued as he has succeeded in taking over political power of every south-western state for his party.

Bola Ahmed Tinubu’s powerful contribution to the demise of PDP’s presidential administration in Nigeria is not to be underestimated. His monetary and influential contributions are some of the major factors in the emergence of Muhammadu Buhari as president in 2015 as well as his re-election in 2019.

Olusegun Obasanjo remains one of the most powerful politicians in Nigeria. He is a onetime military head of state between 1976 and 1979 before retiring. In 1999, he became the President of Nigeria, ruling from 1999 to 2007.

His political influence was so enormous that he was able to install his successor, Umaru Musa Yar’Adu; who came to power through his influence as well as the president after his successor, Goodluck Jonathan. Despite being over 82 years of age, the octogenarian still makes waves in Nigeria politics.

Atiku Abubakar is one of Nigeria’s most influential and powerful politicians. He is a onetime Nigeria Customs’ boss before retiring, a businessman, a politician and a philanthropist.

Atiku was elected Adamawa State governor in 1998 before called on to be the running mate of Olusegun Obasanjo who eventually won and became Nigeria’s president in 1999, while he (Atiku) became the vice president. Ever since then, he has been unsuccessful in his bids to become Nigeria president.

Hardly will you find any Nigeria young adult and adults who haven’t heard the name Atiku; his presidential candidacy under PDP in 2019 further bolster his political power and influence.

Muhammadu Buhari is the president of Nigeria (as of the time of last update of this article), and without doubt, an incumbent president is a very powerful political figure in a country.

Aside this, Buhari is a retired Major General who ruled Nigeria between December 31st 1987 and August 27th 1985 as a head of state. After three unsuccessful attempts, he finally became the president in 2015.

Adams Oshiomole also features in the list of most power politicians in Nigeria for this year. He was a just the once the president of the Nigeria Labour Congress (NLC) during President Olusegun Obasanjo’s tenure as Nigeria’s president. He was also the governor of Edo State between November 2008 and November 2016. Oshiomole is currently the National Chairman of the ruling All Progressive Congress (APC) party.

Oshimoloe’s influence on Nigeria’s politics cannot be overlooked; especially his contributions and influence on the 2019 general elections; his scuffles and disagreements with some governors in his party will not easily be forgotten.

Nigeria’s economic, political and social spheres are mostly dictated and controlled by the political elites. These elites are the ‘dictators’ of how the policies in the country should be and what shape they should take.
The consistent search by internet users for the most powerful politicians in Nigeria gave birth to me writing an articulated post on the topic. No doubt, some might have a contrary view on some of the political figure listed above; some might even feel there are politicians not mentioned. We are always open to suggestions and opinions; let’s hear your views and opinions in the comment section.