Richest Politicians in Nigeria for this Year 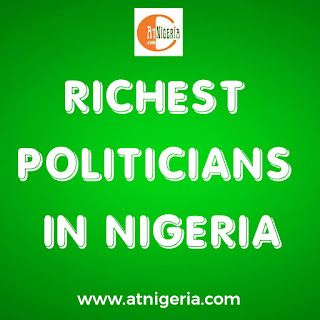 In fact, majority of politicians in Nigeria went into politics because of wealth acquisition, which they acquire through stealing public funds and the likes.

This corrupt nature of politicians in Nigeria does not go unnoticed on the lives and economy of the country; with many citizens of Nigeria living on less than 5 USD daily. This is what has become of the country that used to be great. Unfortunately, thanks to the political robbers that have occupied the political and administrative spaces of our country.

Without further dirge, let’s take a look at the list of richest politicians in Nigeria for this year. Kindly note that the ranking is based on the personal research and opinion of the author of this article; and does not reflect the views or opinion of atnigeria.com.

NOTE: The author does not state that the politicians listed herein are public fund looters.


Richest Politicians in Nigeria for this Year


Babangida joined the Nigerian army in 1962, rising to the rank of an army general in 1987; before his retirement. He also made a move to contest the Nigerian presidential races of 2007 and 2011; which were both consequently aborted.

He was married to the late Maryam Babangida, with the couple having four children: Aminu, Aishatu and Halimatu.


He is regarded as one of the richest politicians in Nigeria for this year, having served as a military head of state for 3 years and 9 months and also served as Nigeria’s president for 8 years.

Atiku Abubakar remains one of the richest politicians in Nigeria for this year. He is a businessman and former vice president of Nigeria between 1999 and 2007 under Olusegun Obasanjo. He was the presidential flag bearer of the Peoples Democratic Party (PDP) for the 2019 general elections, which he lost to the incumbent president, Muhammadu Buhari.

Atiku is a businessman who owns Adama Beverages Limited, and the American University of Nigeria; he is also the co-founder of Intels Nigeria. He has investments in various sectors which include real estate, agriculture and logistics.

Bola Tinubu, widely referred to as Jagaban by his followers is one of the richest politicians in Nigeria for this year. He has political influences in Lagos State, the South-Western part of Nigeria as well as nationally, since electing APC candidate as Nigeria’s president; and also the national leader of the party.

Bola Tinubu was elected a senator representing Lagos West Constituency in 1993 and served as governor of Lagos State between 1999 and 2007. Subsequent governors in the state have all come to power through his influence. His role in electing President Buhari in 2015 cannot be underestimated. Tinubu is also the national leader of APC.

Rochas Okorocha is a Nigerian politician, businessman and former governor of Imo State. He is one of Nigeria’s richest politicians. He founded many businesses as well as attaining several government and political positions.

His political career include: Commissioner on Federal Character Commission, Governorship aspirant under PDP in 1999, ANPP presidential candidate in 2003, special adviser on inter-party affairs to President Olusegun Obasanjo in 2003, unsuccessful bid to become PDP’s chairman in 2007. He became Imo State Governor in 2011 and was re-elected in the 2015 election.


List of Richest Politicians in Nigeria for this Year

Majority of the individuals mentioned above made their wealth from being a political office holder or being a government official. This list completes our list of richest politician in Nigeria for this year.