Richest Pastors in Nigeria for this Year

By AtNigeria August 19, 2019
This article provides you a comprehensive list and details on the richest pastors in Nigeria for this year. 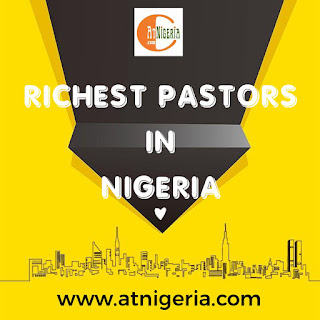 A pastor serves as a link between God and His followers; their major role is to propagate the gospel and teach people God’s words. Their secondary duties include providing guidance and counsel to people, pray for people, perform healings, miracles and deliverances; which in this part of the world the secondary duties has become the determining factors for establishing churches and attending churches.

READ: MOST POWERFUL PASTORS IN rewards attached to being a pastor, especially when you are a very popular one or oversees a large congregation. Pastors, not only in Nigeria but all over the world receive monetary gifts and donations from members as well as sponsorship from external individuals and bodies.

Without further ado, let’s take a look at the richest pastors in Nigeria for this year. It should be noted that their net worth is only an estimate.


Richest Pastors in Nigeria for this Year


Bishop David Oyedepo has an estimated net-worth of about $200 million. He is the founder of the renowned Living Faith Chapel a.k.a. Winners Chapel; the church has thousands of branches in Nigeria, with branches in 45 African countries, the United States, United Kingdom, Canada, Australia and many other countries.

‘Papa’ as fondly called by his followers also owns the two best private universities in Nigeria, Covenant University in Otta, Ogun State as well as Landmark University in Omu-Aran, Kwara State. He is also the owner of Dominion Publishing House which produces books for and from the Church.

He is married to Pastor Faith Oyedepo and they have four children: David Jr Oyedepo, Isaac Oyedepo, Love Oyedepo Ogah and Joys Oyedepo.

Pastor Chris Oyakhilome remains the second in the list of richest pastors in Nigeria this year. He is the founder and General Overseer of Christ Embassy Church. The core element of his teaching is ‘sowing seed’ which translates to members giving part of their income to elevate the work of the church.

He is also known as the author of the popular ‘Rhapsody of Reality’ devotional books, as well as other books. The pastor also owns three TV channels that have millions of viewers across the globe. The pastor also makes money from sales of CDs, DVDs, tapes, and apps.

Pastor Enoch Adejare Adeboye has an estimated net worth of about $45 million – $60 million. He is the General Overseer of The Redeemed Christian Church of God, having taken over from the founder Pastor Akindayomi in 1981.

The church has grown tremendously since he took over the leadership of the church, with the church having over 15,000 branches in Nigeria and also having branches in over 192 countries globally.

The church has a private university, Redeemers University, with the pastor also owning a private jet.

Prophet Temitope Babatunde Joshua is the founder and General Overseer of the renowned Synagogue Church of All Nations (SCOAN) as well as the owner of Africa’s largest religious television network – Emmanuel TV. Prophet T.B Joshua has an estimated net worth of around 25 – 35 million dollars.

The man of God has a followership globally as well as on the internet, with millions of followers each on his facebook page and youtube channel. His popularity is so immense in Africa that he is named among the top 50 most influential man in Africa.

Pastor T.B. Joshua’s wealth can be traced to sales of books, tapes, CDs, DVDs, and donations by congregations and followers. He is also known to be a philanthropist who gives freely and generously back to the society without minding people’s religious affiliations.

Pastor Matthew Ashimolowo remains on the list of richest pastors in Nigeria this year. He is the founder and the Senior Pastor of Kingsway International Christian Centre (KICC).

He earns his money from the sales of books, audio and video recordings of his sermon. His teachings revolve around prosperity teaching. The pastor has mansions, private jet, as well as flashy and fanciful cars. Pastor Matthew Ashimolowo has an estimated net worth of around 20 million dollars.

Pastor Ayodele Joseph Oritsejafor is the founder of Word of Life Bible Church, which has its headquarter in Warri, Delta State. The pastor is known to own mansions, private jet, as well as flashy and fanciful cars.

He is married to Helen Oritsejafor, and they have two sons and a daughter. He is currently Christian Association of Nigeria (CAN) chairman. He has an estimated networth of around $15 million dollars.

Reverend Chris Okotie is a pastor, an author, a musician as well as a politician and the founder of the Household of God Ministry in Ikeja, Lagos State.

The church has a huge followership of music and movie celebrities, due to the pastor’s history as a musician himself. He makes money from members’ contributions and donations as well as sales of book, cassettes, CDs and DVDs.


Richest Pastors in Nigeria for this Year


Above is the list of the richest pastors in Nigeria for this year.

It should be noted that their net worth is only an estimate.


READ: HOW TO SEND MONEY TO NIGERIA