See a Movie or Watch a Movie: Which is the Correct One?

By AtNigeria March 21, 2019
See a Movie or Watch a Movie: Which is the Correct One? Probably you are one of those asking that question.

Often times I have seen many of my Nigerian brothers and sisters trying to ‘form posh’ by using the term ‘see a movie’ when in fact they wrong in most cases. Many heard their friends or people use the word ‘see a movie’ and they think it is a modern, ‘posh’ or ‘tush’ English against what they are used to; so they follow the trend. 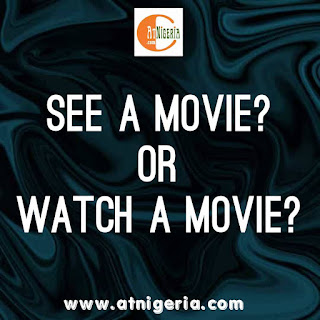 Using ‘seeing a movie’ is not always right and not always wrong to use as well. It all depends on the context in which you are using it. So, you might be right while using it and you might as well be wrong. So, you need to learn the rules. How?

The subsequent paragraphs will be eye opener for you on when to use ‘see a movie’ or ‘watch a movie’ and ‘see a film’ or ‘see a movie’.


See a Movie or See a Film

First, you should note that ‘movie’ and ‘film’ means the same thing in this context. As ‘film’ is British English, while ‘movie’ is American English.

I believe with this little explanation, you should now know when to use ‘see a movie’ or ‘see a film’.


Differences between See a Movie or Watch a Film

Let’s put it in another way entirely. You ‘watch’ a movie or film when you are viewing it on your phone, laptop, desktop computer, DVD, NetFlix, YouTube, BlueRay, VCD, VHS etc. So, if you are viewing a movie from any of the devices, software and applications mentioned, you are ‘watching’ a movie. For instance:
Now I believe with this little insight, you know just about when to use ‘watch a movie’ or ‘watch a film’.

Most Beautiful Cities in Nigeria