By AtNigeria January 24, 2019
Undoubtedly, Nigeria has so many beautiful cities totaling above one hundred. The country has 36 states (2019) as well as a Federal Capital Territory, Abuja, with all these states spread across 6 geopolitical zones. 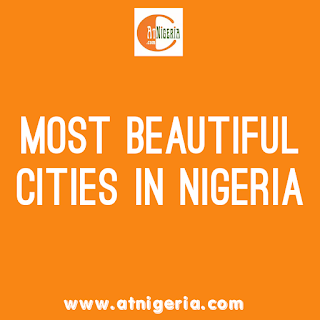 Beauty, they say is in the eye of the beholder, undoubtedly, beauty is so subjective. According to David Hume, “Beauty in things exists merely in the mind which contemplates them.”
So, in no particular order, we present you top 13 most beautiful cities in Nigeria.

Have you been to Abuja? No one will question the inclusion of Nigeria’s federal capital in the list. The city is designed to be a world-class capital city, as it was given a master design both in design and looks.

The city has many notable areas, buildings and places. There you can see luxury shopping malls, five-star hotels, posh residential areas as well as other breathtaking places.

Many will say Lagos is the most beautiful city in Nigeria. Like I said initially, this list is in no particular order. Lagos is a mega city with lot of population, and of course the most populated city in Nigeria.

The elegant and stylish infrastructures in the city make it one of the most beautiful in the country.
Lagos is divided into mainland and island with good road networks connecting both areas. The good road networks of the city generally put the city on top of the map, coupled with elegant buildings, skyscrapers, lovely blend of urban with ghetto as well as the night scenes.

What about elegant estates, state of the art shopping malls, bars, clubs, restaurants, office headquarters and and more? Lagos is home to all of these.

Port Harcourt is known as one of the most beautiful city in Nigeria. Blessed with a greenery and aesthetic landscape, the city presents a sight that leaves imprint in the brain for a long time.

The city is home to so many companies, especially oil companies due to its oil wealth. Port Harcourt is a coastal city and home to many aesthetics and landscape designs.

Calabar is the capital city of Cross River State in Nigeria. The city hosts the renowned annual Calabar Carnival and many other carnivals.

There are many monumental and great places in Calabar such as Calabar Museum, Tinapa Resort, the Slave Trade Museum, the Statute of Mary Slessor, Calabar Drill Monkey Ranch among others.

This city gives you a taste of glamour and nature as you are surrounded by mangrove forest, beach resorts, and seaside beauty among others.

Without much argument, Uyo is one of the most organized cities in Nigeria, presenting you with perfect pictures for the moment (for tourists).

Kaduna is another city that enters our list, and it is regarded as the most beautiful city in the northern part of Nigeria (Jos fans will argue though). The city houses the famous Kajuru Castle.

Some remarkable and memorable places in the city include Amalgamation House, the Nok, and Lord Lugard residence among others.

Benin City is another city from the South-South part of Nigeria in our list. It is an urban city that you will fall in love with. Known for exquisite arts and culture, it is home to many ancient artifacts.

The city of Benin has many famous sites to visit such as the Benin moat, the Benin Royal palace, and the Igun-Eronmwon Quarters among other.

The nightlife of the city makes it a great sight to see, as you can hardly distinguish commercial activates during the day and night.

Akure is one of the biggest cities in Ondo State, also serving as the capital city of the state. The city just didn’t find itself by chance on this list. It is due to its daytime and nighttime beauty.

The city since 2009 has changed its outlook to a modern day state capital, thanks to the beautification project of the then governor, Olusegun Mimiko.

Jos, no doubt is one of the most beautiful cities in Nigeria, it is the capital of Plateau State and located in the North-Central part of the country. The appealing looks of the city makes it one of the best place to visit in Nigeria.

The artistic sites of the city such as Nok art makes it one of a kind, coupled with the cultural diversity of its people. The beauty of Jos is also exemplified in some rare tourist attraction sites it possesses, such as: the Assop Waterfall, Shere Hill, Pandam Game Reserve, Rayfield Resort and the Jos Wildlife Park.

Warri is a city in Delta State and one of the most beautiful in Nigeria as it is known for two things TOURISM and BUSINESS. The existence of natural petroleum makes it even better, and has drawn a lot of attention for many decades now (Warri no dey carry last naa!).

The city is the hub of Delta State as it gets more attention than the capital city, Asaba. The city has many resorts and beautiful sites such as the Olu of Warri palace, Warri Kingdom Royal Cemetery, Red Mangrove Swamps, Effurun Garden Park, Nama Palace among others.

Ibadan is another South-Western state on our list of the most beautiful cities. It is the capital city of Oyo State, the third largest city in Africa, largest sub-Saharan city as the third most populated city in Nigeria.

It is a city that has stood the test of time, while serving in the past as the centre of the colonial administration for Western Region during the British colonial rule. The blend of ancient buildings, cultural wealth and modern development of the city gives Ibadan city a place on this list.

The Kano City Wall is one attraction that gives you a glimpse of beauty of this ancient city. The Dala Hill is another exquisite site in this city, having 999 steps.

Enugu is referred to as the Coal City, and the capital city of Enugu State. The city has great view and blessed with cultural diversity. The historical artifacts of the city are jaw-dropping, coupled with various crafts and arts as well as several recreational spots.

Could it be true however that: BEAUTY IS IN THE EYE OF THE BEHOLDER?